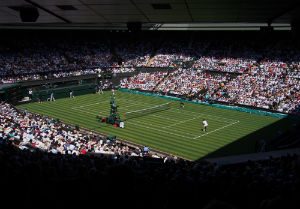 What can King of the court Roger Federer teach us about communication?

Roger Federer is my favourite sportsperson of all time. He oozes with a calm, sophisticated determination which allow him to make being one of the best in the world look effortless.

But, what does it have to do with communication?

Well, Roger Federer is an undeniable brand. Whether he set out to build himself as one or not, ’Roger Federer’ stands for his persona as well as his sporting prowess. Today, he is a classic example of how communication runs through everything you do.

He works extremely hard behind the scenes so that it looks effortless when it matters. He obviously trains extremely hard to be as good as he is, but he rarely looks out of breath or under pressure. He delivers clean efficient movement and a set of very precise skills, even on the grandest of stages.

His dedication and commitment to the cause is evident in his whole demeanour, but you rarely see a break in his calm exterior. He is not a sportsman that wears his heart on his sleeve nor is he ungracious in defeat.  He is known for inspiring others to adopt a calm exterior on the sports field.

I have it on good authority that he was not always so calm behind the scenes. Over time he has mellowed and built a loyal following of millions of spectators around the world.  He is also loved by an awful lot of his competitors for being such a nice guy.

His family and team continue the same trend.

There is an added bonus with Federer and that is his family support, something that seems to be a key feature with tennis players. Federer’s family are very visible in the box at Wimbledon, and they seem to have a similar approach to him. Although, they do show more nerves from time to time.

Unflappable with the media. As someone working in PR I respect his ability to always  answer media questions coherently and with considered information. He is, no doubt, well trained in this area by now, but it is still nice to see and I doubt his team will worry too much about what he will come out with – something that can’t be said for everyone.

He has a personal logo which even the recent swap from Nike to Uniqlo can’t damper. When you see the RF you don’t think Nike, you think Roger Federer. It transcends the Nike brand and, although currently owned by Nike, he is confident it will come to him in the end. It is his initials after all. It is something that goes hand and hand with the man, not the clothing company.

The new agreement is rumoured to be a $300 million deal over 10 years which seems to reinforce his brand worth. How many other aging sports people have been known to make such a deal so late in their careers?

He embodies his profession. For someone who was never really into tennis, Roger Federer represents tennis, Wimbledon, and sport. I believe he is an example of best practice not only in sports, but in business as well.

To me, he stands for quiet excellence and gives me inspiration to put in the hours behind the scenes to deliver the best possible performance. His calm professionalism in pressured situations demonstrates a standard to strive towards and his commitment has been rewarded with longevity.