Harry Potter Studios are magical, but it’s not just the story which makes them so

Last summer I visited the Harry Potter Studios at Leversden with a group of friends. We went because we all love Harry Potter, the world that JK Rowling built in her books and Warner Brothers reinforced in the films.

The four of us work in different careers and have completely different interests; I’m in communications, Gemma is an art and CDT technician in a senior school with interest in theatre scenery, Gina works in events and is an amateur actress and Tara is an OT. 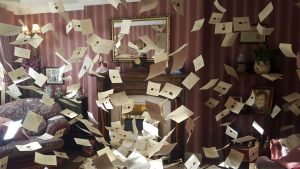 The theatre tour gives us the opportunity to step into a world which we never get chance to see, we get to absorb the set from within and feel part of the magic.

Films and books allow us to escape reality for a while and feed our imaginations, but that is not all they are good for. Film can act as a shop window, showcasing not just the story the actors, writers and directors but much more.

The growth of the UK film industry is supplying some of these opportunities on a large scale. The British Film Institute reports that UK film exports were 116% higher in 2015 than 2006 with a turnover of £10.2 billion. ( http://www.bfi.org.uk/sites/bfi.org.uk/files/downloads/bfi-uk-film-economy-2017-08-30.pdf )

Apart from the obvious benefits felt when an industry grows, the recent success of British films has a knock-on effect. Not only do destinations benefit from film tourism, as fans visit their favourite locations, but many other industries get their place in the spotlight as well.

The studio tour is a visitor attraction for fans of Harry Potter but it also illustrates all of the industries and skills needed to bring a film to life. For a film series which has so many elements created exclusively for it, this expertise comes from carpenters, electricians, designers, architects and robotic engineers, not to mention the usual animation, wardrobe and make-up artists, to name just a few.

The studio showcases Great British industry at its best. As we try to inspire the next generation, endeavour to bridge the skills gaps growing in science, technology, engineering and mathematics and entice more to take up apprenticeships we should show them the studio tour, invite them to see other film sets, football stadiums and theatres. Let them see the different ways that skills can be used and celebrate the industries we have, the industries that their parents and relatives are part of, and highlight examples of skills they may take for granted. Show them something out of the ordinary to inspire them and highlight the options open to them.